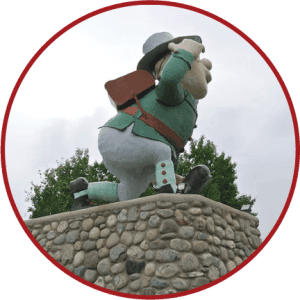 The town is named after a science fiction character, Josiah Flintabbatey Flonatin, from the 1905 book The Sunless City by E. Preston Muddock. His large statue on the Station museum grounds was erected in 1962 on a design by cartoonist Al Capp.

The mining prospectors who discovered large mineral deposits near the future site of the town found a copy of the book nearby. Recalling the novel, prospector Tom Creighton suggested they name the place Flin Flon.