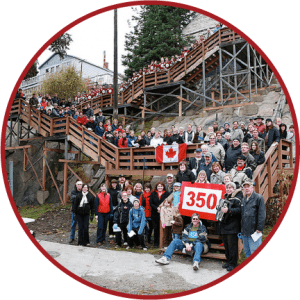 In 1935, a large flight of stairs was built for pedestrians as a short cut to get to Main Street from Third Avenue. In 1947, local politicians conceived of 140-metre tunnel to get pedestrians between the two locations instead of having to walk up the hundred stairs.

The builders got within four metres of completing the tunnel when enthusiasm waned and the dimensions of the tunnel shrank to a point where it became a storm sewer outlet.
During the Cold War, when nervous neighbours further south were building bomb shelters in their basements, Flin Flonners figured that if worse came to worst, they could hide in the tunnel.