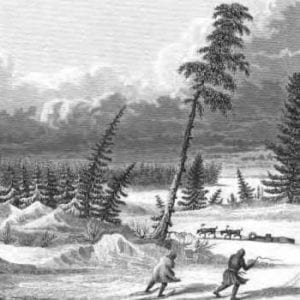 Franklin wrote in his diary that his men took up a game on the ice that sounds strikingly similar to hockey. For this reason, Délı̨nę is considered one of the birthplaces of ice hockey.

November 6, 1825, Franklin notes, “[w]e endeavour to keep ourselves in good humour, health, and spirits by an agreeable variety of useful occupation and amusement. Till the snow fell the game of hockey played on the ice was the morning’s sport.”

The first indoor hockey game was played on March 3, 1875, in Montreal.

Photo: George Back in Fort Franklin, 1825 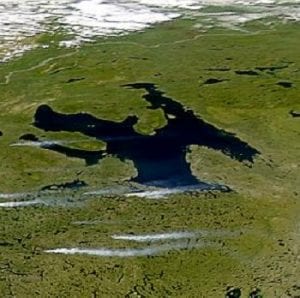 The traditional name Délı̨nę means “where the water flows”. It makes reference to the headwaters of the Great Bear River and Great Bear Lake which is the largest lake entirely in Canada.

Great Bear Lake is made up of five separate arms, each with their own names: Dease, McTavish, McVicar, Keith and Smith.

Délı̨nę is the only community on the shores of the lake. 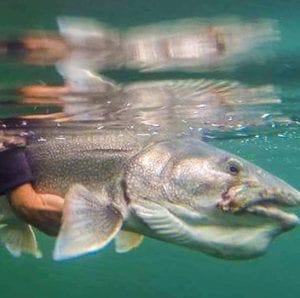 There is no better fishing in the world. Great Bear boasts the All-Tackle World Records for lake trout and arctic grayling, as well as dozens of line class records. 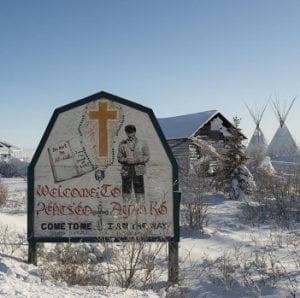 Shrine to The Prophet Ayah

He shared over 30 prophecies including the discovery of diamonds in the Northwest Territories and the appearance of three polar bears in Délı̨nę.

Visit his grave and the shrine built to him and ask the locals about all that he foretold. 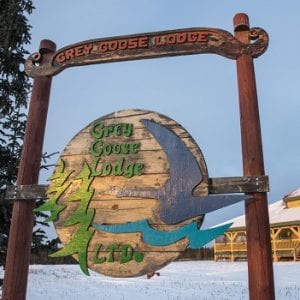 Filled with crafts from local artisans, a spectacular view from the hotel and deck and just steps from Great Bear Lake, the Grey Goose Lodge offers a unique staycation getaway for adventure seekers. The Grey Goose Lodge is the hub of community life and offers accommodation.