Top 15 Places to Visit in

sarnia | ontario
The page was created with the support of

It’s a treasure of a park on Lake Huron. The sandy beach located within Sarnia’s Canatara Park stretches nearly a kilometre along the shore of Lake Huron near the mouth of the St. Clair River.

The beach has so much to offer to you – it has an animal park, beach volleyball courts are available for public use, there is a skateboard and bikes park, and there are walking paths throughout the park.

Canatara is an Ojibwe word that means Blue Water. The park was opened in 1933.

Within the park is Lake Chipican, a haven for many different species of birds on their migration routes. 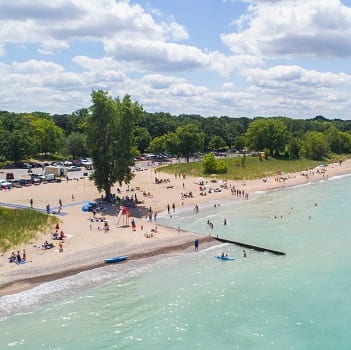 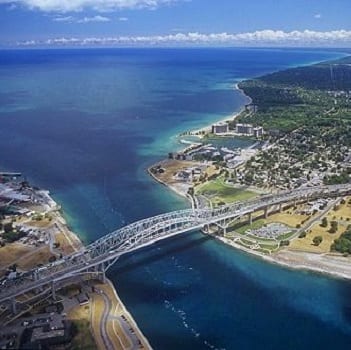 The historic Blue Water Bridge is a twin-span international bridge across the St. Clair River that links Sarnia, Ontario, and Port Huron, Michigan.

The Bluewater Bridge was originally built with two lanes for vehicles, and sidewalks for passengers on foot; later removed to make room for three lanes to be used by vehicles. The original solo bridge construction started in 1935.

The second three-lane bridge, just south of the first bridge, opened in 1997.

Sarnia Airport was renamed in honour of Chris Hadfield in 1997.

In 2019, the former astronaut was honoured with a Canada’s Walk of Fame Hometown Star celebration at Sarnia’s Bayshore Park.

Chris spends time at his cottage on Stag Island on the St. Clair River. 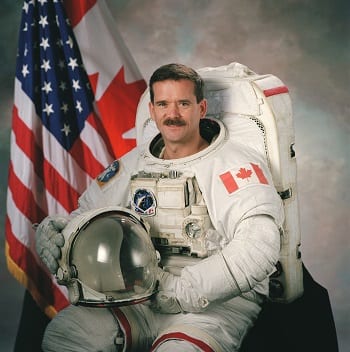 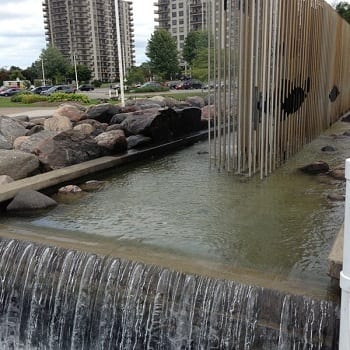 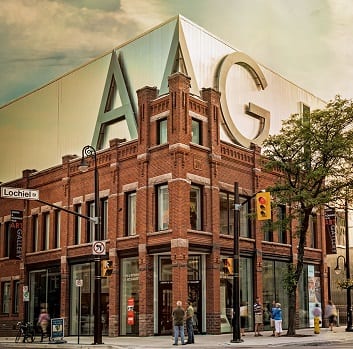 The Souls Memorial stands in tribute to the generations of Ancestors who gathered on this site for trade, for celebration, for teaching, and for sharing in seasonal spiritual ceremonies. This is a very specific area; the outlet of Lake Huron where it flows into the St. Clair River named Aamjiwnaang. It was used by First Nations for millennia.

The Souls Memorial was designed and executed by Anishinaabe artist, Dennis Henry-Shawnoo. He handcarved, from a single massive stone, the tall plinth. On the central statue, he depicted a series of faces representing the ancestors and the past

The Sarnia Kinsmen Ribfest is a popular competition where local amateur chefs share their recipes for barbecued ribs. It has become a marque family-friendly event with an annual attendance of over 15,000. This three-day event of family fun offers great food and live entertainment that has been enjoyed for over 20 years.

The festival’s main attractions are the ribbers and live music 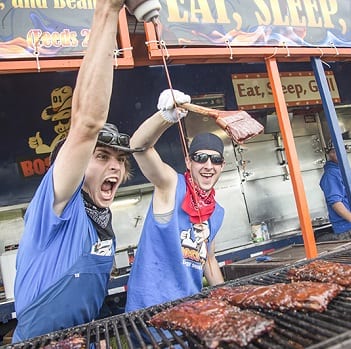 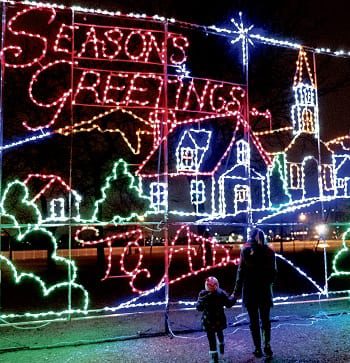 During the Christmas season, the city of Sarnia presents the annual “Celebration of Lights” in Centennial Park.

The event was created in 1984 by Dr. Wills Rawana and a committee funded by the retail chain Hudson’s Bay, and the national telecommunications company Telus.[134] From modest beginnings, the event has garnered numerous awards as it has grown, including second place in the 2002 Canadian Government’s Canada WinterLights competition.

Korny Korners is a fun attraction. The farm is a century-old farm covering four generations.

The farm transitioned from a milking herd of Jerseys to Aberdeen Angus beef cattle to horticultural and field crops such as sweet corn, pumpkins, hay, soybeans, winter wheat and field corn.

The Market and Farm Adventure is open from June to October. Pumpkin Fest is Fall weekends, PD days, and Thanksgiving Monday. 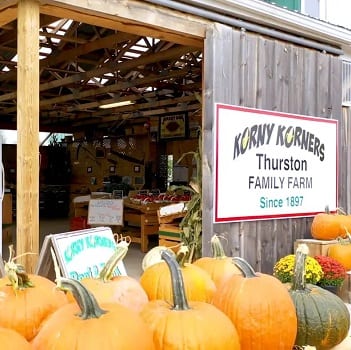 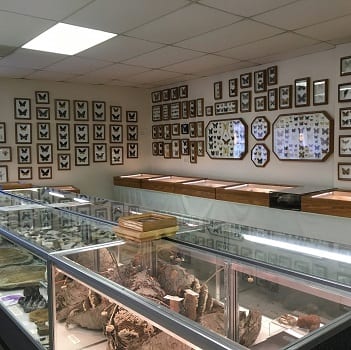 Since 1964, the Seaway Kiwanis Club has provided local residents and visitors one of Sarnia’s foremost and most-visited attractions. The “Park Zoo”, as it was originally named by the newspaper, was instantly a big hit with the majority of people visiting on Sunday afternoons to see and visit with the animals.

The Children’s Animal Farm is nestled in a picturesque environment that features attractions for visitors of all ages and interests. Take a leisurely stroll, observe and learn about the animals or enjoy the Farm’s natural setting and environment. 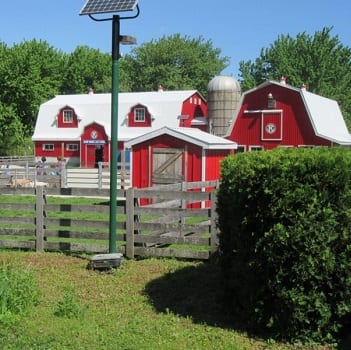 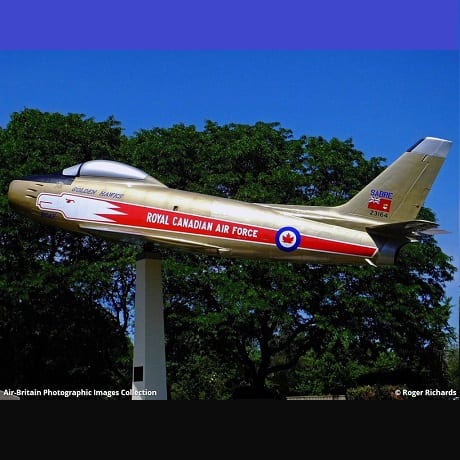 As a memorial to Canadian aviators who died in World War II, one of the remaining Canadair Sabres in Canada is on display in the Germain park.

Along with an RCAF memorial plaque, there is an F-86 MkV Sabre Golden Hawk fighter jet, serial number 23164. Originally it had been stored in a warehouse and was almost burned beyond repair in a fire in 1970, while in storage. It was restored in 1971.

Over 20 Years ago the Capitol movie theatre was transformed into the Imperial Theatre.

Originally built as The Capitol Movie Theatre in 1936, the Capitol was lovingly restored between 1995 and 1997, in all of its Art Deco elegance, as indicated in the pictures of the foyer. It was transformed from the premiere movie-house to a modern theatre for live performances and renamed the Imperial Theatre. 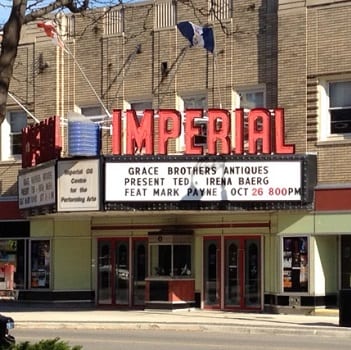 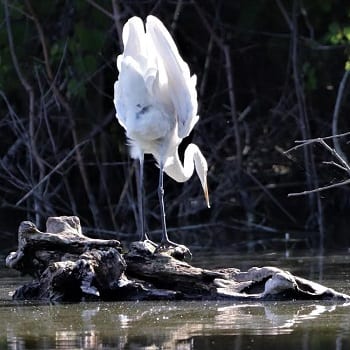 Wawanosh Wetlands is a brilliant birdwatching spot! Wetlands and walking trails around the ponds with benches to rest on and lookout points to observe the wildlife. Parklands to picnic and rest in are included. Parling available as well. Nature at it’s finest.

This beautiful natural park is located within the city of Sarnia. Over 2.5 km of trails will guide you through this significant marshland that provides critical habitat for over 220 species of resident and migrating birds. The park is also home to over 700 species of plants and a variety of fish, reptiles, amphibians, and mammals.

Lawrence House Centre for the Arts

The Queen Anne style house built at the corner of Wellington and Christina streets in 1892 for lumber baron William Lawrence is the home to the city-owned Lawrence House Centre for the Arts. The Lawrence House Centre for the Arts officially opened its doors on June 17, 2001, providing a venue for performances, exhibitions, educational programs and special activities for all ages.

The Lawrence House was occupied by the Lawrence Family until 1940. The house remained uninhabited, yet fully furnished, until 1977 when it was donated to the City of Sarnia. Through generous donations from the Suncor Energy Foundation and the City of Sarnia, the house was fully restored in 1986.

We have a beautiful Gift Shop and try to have a new art exhibit every month. 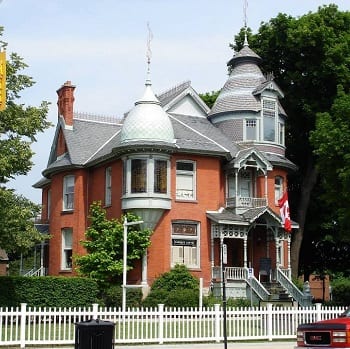 Top 15 Places to Visit in Sarnia ON